There are many builds, but this one is mine.

I plan to eventually bolt directly on and lose the aluminum c-clamps. Looks like the rack is the exact height of the rear most portion of the roof slope. I plan to run a large cargo basket that extends halfway over the cab, so I'm still going to have to come up with a spacer for a little extra clearance for the peak of the roof slope. I was thinking the height difference was going to be bigger by quite a few inches so this was a welcome surprise.

I also need to account that I only have about 5 1/2" clearance from my roof to my "garage-zeebo" front entrance. So either a short railed basket/tray or I'll have to raise the structure, or dig out some earth at the entrance. (it slopes further you get in so clearance increases a little).

I will get much better pictures to share this weekend.

OFC Ranger said:
Not sure if I like the full length or previous version. What ya'll think?

Edit: Ended up ripping the the extra off, didn't like it. Too sports car'ish.
Click to expand...

No pretty setup shots, but some better ones.

I have a 64" cargo basket coming in tomorrow which will be temporary till I get with a local metal fabricator to build me around a 100" long over the cab safari style cargo tray. Started planning on some perimeter lighting setups and looking to fabricate a mount for one of those telescopic aluminum ladders to go on one of the sides to drop down and give easy access to the top. May go with a marine style boarding ladder which is similar. Jack, rotopacks, roof storage, ARB awning, ARB awning tent, blah blah blah its all on the books.

Nice! I like the minimalistic feel. I have the same color and i think we might be in the same wanting to achieve a minimlalist setup. I might have taken an inspiration with your side decals. Here's mine Had to get creative with the clamps as the bed rack is in a fixed position and no standard roof top cross beams in place. It ain't going no where, but a more ideal hook up will be forth-coming. Right now clamps are in a cross pattern instead of usual pair running in parallel.

Then me and wife went for a ride up to the lake/dam area.

Wrench in the gears avoided. She can still make it into the garazeebo!

Plan to order everything I need to get started next week. I am going to build a rear bed electrical control box (for lack of a better description) to get overall wiring of even length and also make access for troubleshooting or adding/deleting much easier (IMO). Basically nothing more than what people already do, but just having an easier access location than cramming stuff under the hood or somewhere under the dash.

Debated the type of box to use, but ultimately picked up one of these guys from Walmart for $15 bucks. Already has the weather seal installed. I'll need to drill some holes for wiring access coming in and out of it, but some sealing epoxy will take care of that. This will be mounted at the rear of the bed, probably up on the rear wall under the bed lip. (still debating)

Super long term goal is to add a second 12V along with this.

Lots of people buy 12 x 12 sheets of plastic and cut them to size, in this case I think I can just use the bigger of the two inserts for this box as the mounting plate, which will give an added benefit of not being connected to an outer wall (which means screws + more epoxy) and will also give a cleaner subtle look. It will also leave room to store spare electrical components.

- Resupply some of my various wiring sizes

- Resupply some of my various wire connector types

Overall cost should be under $100

Watching various YT videos pretty much this one made it simple for my slow-mo self to understand;

Alright so I bought a Boomba adapter for a great deal ($68 vs regular $90) so I could see if they sound was going to be annoying before spending money on an actual TurboSmart complete replacement.

Having never owned a turbo vehicle before this is one of the most addictive things ever. That "PSSHHHHH" sound makes me feel like a kid on Christmas morning every single time. I was amazed even at highway speeds that sucker is pretty loud.
BUG OUT TRUCK / MOBILE GUN PLATFORM PROJECT

Scored another mountable case for $30 that a buddy had in a pile of random stuff he doesn't use.

Consolidated photo log from another thread regarding the custom platform / cargo rack.

This price reflects everything from nuts/bolts to paint as well as having to buy some tools I did not own at the time. It also accounts for "ooops" learning experiences. Price is probably around $400 with zero screw ups and 1:1 supplies without other purchases. Price would probably bit a bit lower if you can weld and nix aluminum components.

Mates with the RCI bed rack by way of very long carriage bolts and rests on 6 cross beam supports added to the top of the bed rack. Over the cabin support is provided by four adjustable swivel heavy duty furniture supports that rest in the rain gutters of the roof. This allows for minor flexing between the bed and front section. Disclaimer: I have no idea what effects may happen if this was used for serious off-roading. Maybe nothing. Maybe it would explode in glorious fashion like F/X in a Michael Bay movie. 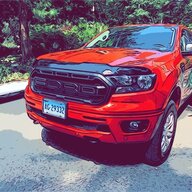 OFC RANGER:
When you removed the air dam did you do it to install the bull bar?
I purchased a Black Horse 3" bull bar (it matches the nerf bars and rear hitch step) and the instructions say to remove the front bolts on the skid plate and it appears the dam is in the way? Not that it affords (much) efficiency but to take it off it looks like it is fastened to every bracket, bumper, frame etc under the truck. Any suggestions?
BTW nice truck, ordered one in white and a week before it arrived I saw one in Chili pepper red and fell in love...
OP

SheepDogRain-Jar said:
OFC RANGER:
When you removed the air dam did you do it to install the bull bar?
I purchased a Black Horse 3" bull bar (it matches the nerf bars and rear hitch step) and the instructions say to remove the front bolts on the skid plate and it appears the dam is in the way? Not that it affords (much) efficiency but to take it off it looks like it is fastened to every bracket, bumper, frame etc under the truck. Any suggestions?
BTW nice truck, ordered one in white and a week before it arrived I saw one in Chili pepper red and fell in love...
Click to expand...

I have an XLT so no skid plates, our air dams are a little different than yours. To answer your question I don't know if it is required as mine was already removed. I did have to take off the tow-hooks. My bull bar did come with extra brackets if I had a skid plate, but since I dont they were just extra parts.
BUG OUT TRUCK / MOBILE GUN PLATFORM PROJECT 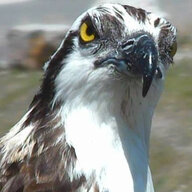 I like that bed rack but with my Ford tonneau cover it would be a no-go.
“ Experience is what you get when you don’t get what you wanted.”
-- Randy Pausch
OP

port43 said:
I like that bed rack but with my Ford tonneau cover it would be a no-go.
Click to expand...