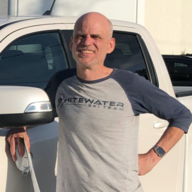 BowWow said:
I got the you-pay-what-we-pay employee pricing incentive, and my dealer was very generous with my trade-in allowance. No other incentives.
Click to expand...

Yep, that‘s basically exactly what i got. Cool. Thanks. 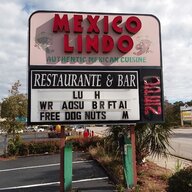 Location
Down south in Dixie

@BowWow Steve, thanks for the pics. I was getting ready to order the dash decals from TVD, and was wondering if they looked good. Now I know. I'm also thinking about the decals for the side vents, but kinda undecided right now.
"I tend to think donuts define one copliness" - Luther "Suitcase" Simpson
OP 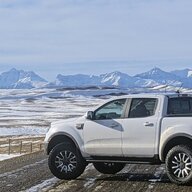 Under hood light. $5 from Walmart, uses 3 AAA batteries. Touch the button in the center to turn it on and off. Had to be careful with placement so it didn't get smashed between the hood and the plastic shrouding. Just used 3M tape. I haven't gone over any rough stuff, so I'm not sure how rugged it will be, but if it disappears its no big loss. Rough Country bed mat. It was about the same cost as the DeeZee mat, which I've had on other trucks. Good thickness, great fit, non-slip surface, and I kinda like the look! Well, would you just look at that! This followed my son home from the post office today, along with an led taillight for my Buell! Yay! Tomorrow will be damper, wheel spacers, removing crash bars, and modding the mud flaps in prep for stuffing a set of 33's into the wheelwells. Eibach struts and rear shocks are on their way, but I'm not holding my breath. Takes a while to get to Canada, apparently... Gave her a little nose job...

PS. Do not buy Duplicolor spray paint at Canadian Tire! Terrible spray nozzles. The clear leaked all over the place while spraying. I think I got more on the floor than on the grill...

Another angle. Sorry for the bad lighting! Cool! I really want to do something about our chrome grill. Not sure if it will stick vs on magnetic grill. Yours is White Platinum, correct? Did the duplicolor come in three seperate coats? How good is colour match?
OP

BCRanger said:
Cool! I really want to do something about our chrome grill. Not sure if it will stick vs on magnetic grill. Yours is White Platinum, correct? Did the duplicolor come in three seperate coats? How good is colour match?
Click to expand...

Color match is good, I did a two stage job, color and clear. The platinum pearl white is a three stage process, my truck is oxford white.

I have the magnetic color painted grill, so the sanding was pretty easy. I wet sanded with 600 grit sandpaper, made sure every tiny corner was scuffed, then rinsed, dried, and wiped down with denatured alcohol using a lint-free cloth. Sprayed several light coats, letting each dry about ten minutes between coats, then a wet final coat. Let that dry 30 minutes, then did the same with clear. I did not sand the white before applying the clear.

Since the clear sprayer was so bad I'll probably lightly sand and redo the clear. It turned out pretty good, but there's a couple of spots that could be better.

I think buying from Canadian Tire is a bit sketchy. I think the white had been on the shelf for a while. I kept both cans at room temperature for a couple of days before use, and shook them for several minutes before painting. The white has an agitator ball inside, but the clear does not. The white was fairly goopy when I first started (I sprayed a piece of cardboard first, to get the goop out of the pickup tube), but it mostly cleared up. I shook the crap out of the can between coats! There were still a couple of small lumps while painting, but they leveled out pretty good. The end of the can got lumpy again. The sprayer on the can of clear leaked like crazy. It was a real mess. I managed to get a pretty good cover, but it was a real challenge.

I know it's not the right thing to do, but if I ever buy Duplicolor again I'll test spray in the store...

I bought one can of each, which was adequate coverage. CT only carrys the half-size paint cans - no regular size rattle cans. A regular sized can would have been better, as I wouldn't have had to deal with the gobbing at the end of the white. I was leaving the next morning at 5 am, so I had to get the job done, and my nearest CT is an hour away (yeah, I'm a small town kid...)

Overall it went ok. Removing the grill is a pain in the butt. Lotta plastic has to be removed before you can get to the tabs on the grill. Use a short screwdriver to get the bottom tabs, and a longer one to get ones beside the headlights - one on each side. The center part that I painted is held on by 13 screws (can anybody say "overengineered" ?), and is actually two pieces (plus the badge).