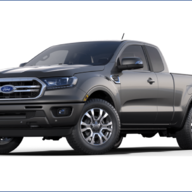 1depd said:
Thank you all for your replies. Some brought up good points. I do normally drive with the radio up a bit louder than what most would call acceptable, so engine noise doesn't bother me. Besides that I'm a fan of 60's muscle so to say their engines are quiet is a definite mis-characterization. We were going for a second look probably today. I'll check to see if the Lariat is quieter than the XLT.

As far as the leather seat A/C both the wife and I are heat intolerant (medical conditions made worse by heat) so we need as much air circulation as possible. Cloth seats breath naturally, while leather does not. I didn't think it was that big of a deal until we drove to her mother's house in our truck, that has them, then switched to her mom's car that doesn't. There was a big difference in comfort level. I know nobody will know the exact answer as to A/C seats, but if there are rumors that could be entertaining. With the F-150's, the order book seems to be "leaked" several weeks to a couple months before the official book is released. I know the 2019's just hit the floor a couple months ago, but the 2020's should be going on sale within the next 4-5 months, so I was hoping it had been leaked. On sale in 4 months means orders should start in about 3, with the official order book coming out in another 2 months or so. Often in those books it also will tell if an option not currently available, but will be during the mid-year.

Nothing can be done about the closed in feeling going from an F-150 to the Ranger. I think it is her way of shooting down the Ranger. She is pushing for an Explorer. The issue with that is we would have to buy a Limited (she found the XLT seats uncomfortable). That makes it a $50k car, even with x-plan. She was told that is not an option. As some have pointed out parking the F-150 in the area we live is rough. We live out a bit, but to do anything requires going in to a large, populated area. The parking spots are made for compact cars so the big truck barely fits into two spots, but fills those spots line to line. We are better off taking four spots. If there isn't a pull through parking that means we have to back in. That is kind of tough with the bigger vehicle.
Click to expand...

I'd say if you are cross-shopping an SUV and a truck, then what you really need is an SUV. *But*, That's a 15-20k difference in price so I get why you'd rather go with a Ranger. The Lariat won't be *that* much quieter. Supposedly the engine cover masks some fuel injection noise, so you can buy the cover. Perhaps the softer dash in the Lariat mutes a bit of noise, but then I'd think the cloth seats in the XLT would mask more noise than the leatherette.

If I'm understanding correctly, the main problem with the Explorer XLT is the comfort of the seats, but looking at the build and price, there is 202a option with 8-way adjustable seats. I'm guessing those are comfortable but you have the problem with the leatherette. Have you considered just taking it over to an automotive upholsterer and having some cloth seat covers made? It wouldn't be cheap..probably ~2k, but still significantly cheaper than the Limited.

Yesterday we went out and looked at all three again. The Explorer does have more in interior room. Although this time she said she didn't feel closed in with the Ranger, which surprised me because we went from the F-150 to the Ranger.

The Ranger Lariat was much quieter than the Ranger XLT. Listening closely it was the injectors that were the problem. There wasn't any issue with the fan. I can deal with the injectors by adding the cover.

We were hoping that Ford put out the Ranger quickly and didn't have the time to get everything they wanted in the vehicle. If they put it out they can see the areas the buying customers want by listening to their complaints. It wouldn't be too difficult to wait to add certain options, unless the underlying structure of the vehicle prohibits it.

The main problem with the Explorer for her is the comfort of the cloth seats, not that they can't be put in a comfortable position, but that the seats are uncomfortable to her. We drive a lot so they have to be comfortable. In order to get the leather seats we have to go up to the Limited. The problem for me then becomes the price. I'm not paying $50k for the SUV.

As it is now we are waiting. I still need a truck. We own a house and went without one a few years ago. It was a pain in the rear, not to mention hauling 5 bags of cow poop takes a bit to clear the smell out of car/SUV. Add to that $50k is too much for a want and the Explorer is off the list. If the Bronco makes to the floors soon that might be an option. They are basing it on the Ranger, so hopefully it is more refined and has more options since most of the design has already been completed, although the same can be said of the Ranger. If they don't have what we want, then we will keep the truck we currently have and either wait until they do offer what we want, or move on to a car that costs substantially less and rent a truck when we need one (a pain in the arse).
OP
OP

Formula Indy said:
You may want to try the stone interior. I think lighter colors make the cab seem larger. My wife thinks the Ranger is as roomy up front as her Flex.
Click to expand...

We had the stone leather in my last F-150. I liked the color, but it liked the dye from our blue jeans and was quickly stained at the seams with blue. We couldn't get the color off the seats. It made them look dirty and dingy. Otherwise I liked the color. It kept the inside a bit cooler also.

1depd said:
Well last weekend we took a Ranger for a test drive. We chose the XLT. I liked the Lariat, but leather seats get hot without the cooled seats and that option is not offered. The wife didn't like two major items. 1) She felt closed in. That could be easily explained by the fact that we are driving an F-150. 2) She thought the engine was entirely too loud. Our current truck I very quiet.

My questions to anybody who might know are: Is the Lariat Ranger quieter than the XLT? Is Ford contemplating putting cooled seats in the 2020 Lariat?
Click to expand...

After I got my XLT, I drove it for a bit. Once, when looking under the hood, I caught on to something. Some bstrd stole my engine cover ( : o . A bit of research revealed it was Ford. They don't put it on any but the Lariat. Probly saves them $15 bucks per truck sold. Then they will sell it to you ! I bought mine online for less than $60. Install is super easy. It is made of some kind of dense foam. Think black nerf. It knocks a few db off the engine noise. (I made it up by installing a flowmaster catback exhaust and injen air intake. ) Here is the part at lowest cost I found today: https://www.oempartsource.com/oem-p...afK33Xpxy1ec7zu4BRzZCi2E8rnbAGcxoCBWMQAvD_BwE (PS I dont work for these guys or get anY $ for any sale). Some dealers will charge over a hundred bucks!
Advertisement
You must log in or register to reply here.
Share:
Facebook Twitter Reddit Email Link

Ranger compared to Subaru in snow
8 9 10

Size Compared to the Tacoma
2

Maverick in at my local dealership, compared to my ranger
7 8 9