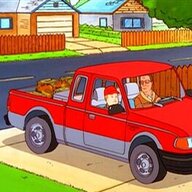 When I heard about Ford bringing the Ranger back I immediately wanted one. My first ever car was a 93 Ranger that my grandfather bought brand new. I still own it too. May of 2020 I decided to trade in my 2013 F150 and take advantage of some of the pandemic deals they had going on and picked up a brand new 2019 Ranger XLT. I enjoyed the F150 but I just couldn't squeeze it into places off road without risking some major trail rash and damage. I have plans for the Ranger but I know it will be a slow process. Currently, its basically a stock truck minus the Velossa Tech Big Mouth. I have a set of Icon Tubular UCA sitting at home waiting to be installed that will go on whenever I purchase the Old Man Emu leveling struts. This set up should get me some extra travel while keeping everything in the proper geometry. I've settled on 255/75 Duratracs when the time comes too. Icon recommended keeping the stock tire width if I'm keeping the stock wheels which is fine with me.

One of the first things I did was fill in the RANGER on the front grill. I couldnt bring myself to pay $100 to get blue tow hooks from ford so I bought a $7 can of spray paint and did it myself.

Next up was Diode Dynamic SS3 fog lights and LED headlight bulbs. I just recently installed Lasifit turn signal switchbacks but don't have a picture

I figured out quick that I would need some more storage room too. I like to keep most of our camping gear in Pelican 1650 cases so I don't have to worry about rain or dust and its nice being able to use the case to stand on without fear. Yakima cross bars on the bed along with a small cargo rack worked perfectly. It holds 2 Pelican 1650 cases just fine which really opens up space in the bed. (I also ditched the Sport 4X4 decal) Eventually this will be a more robust build, but its also a budget daily driver build so I'm in it for the long haul. For now, it does what I need it to do and I'm thoroughly enjoying it! 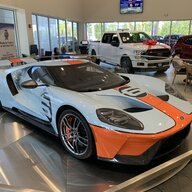 @TBR17 hahaha. Yes, I fall on that side of the divide.
Slow Go Camping Build 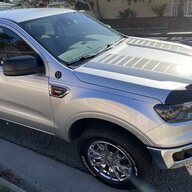 Hooks look nice, should add the RANGER letters for the grill in same/similar blue to go with it. I themed out in red/black as example of how letters could look from https://tvdvinyldecals.com/ 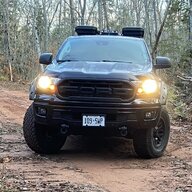 FoD said:
Hooks look nice, should add the RANGER letters for the grill in same/similar blue to go with it. I themed out in red/black as example of how letters could look from https://tvdvinyldecals.com/

@FoD that's where I got my vinyl. This spring I'll do the tailgate and side vents. Nice idea with changing to blue!
Slow Go Camping Build