I have the FPP ordered and wanted to know how the long term reliability will be after installing it. I have an extended bumper to bumper warranty for 125000 miles, but as I understand Ford will only honor 3yr/36000 of the warranty from the purchase date of the vehicle. I am just concerned that it will decrease the life of the turbo/engine, by running it at a higher boost. Any information will help, as I am new to the Ecoboost technology.
Advertisement 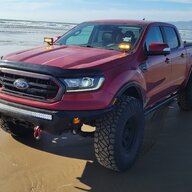 I will preface by saying I don't have any insider information, and I could be totally incorrect.

My understanding is that your normal warranty will cover everything as primary coverage. However, if a warranty repair is declined due to the damage being caused by the tuner, then the FP tuner warranty would kick in, but it will only cover you for 3yr/36,000 miles.

While most people can run a tune without any issue, I did have a 2019 Honda Civic Si that I had tuned and had warranty issues because of it. At 11,000 miles 4th gear failed. It was ground down to the shaft and was completely smooth. Honda tried to blame my intercooler and CAI and denied the repair. I took them to arbitration and won. They had to replace the transmission. Honda did not mention the tuner at all during my claim.

Then at 19,000 miles, the oil pump failed, which caused the turbo to fail. Again they denied the claim, this time specifically citing the tuner (they know, even if returned to stock). I got a lemon law lawyer involved, who didnt want to take them to court because the standard for proof is just low enough that they could win. He got them to settle for $5000, but I was on the hook for repairs.

Everyone will tell you manufacturers can't deny coverage unless they can prove the tuner caused the damage, but you will still have to take them to court and as I mentioned before, the standard of proof required is very low.