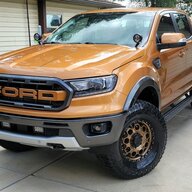 Trying to work around this 93f heat and 5 weeks post op from a total knee replacement but I managed to remove the oem trim on one corner and install one of my new bushwacker pocket flares at 1am this morning. After a few hours sleep I am halfway done with the 2nd wheel (driver side) trying to pick my battles with the heat.

I've attached a before & after picture plus a picture of how I finally dealt with the rubber molding that makes the sharp curves around the gas cap. I trimmed the inner part so it would stop popping off the lip. The 90 degree side was worse to contend with but had to do the same with both curves. Instead of stretching the rubber push it together a bit to release some tension and it stayed on. Had no issue with the front wheel. Will install the rear flare after sundown. The Build has Started